By using and browsing our websites, you consent to cookies being used in accordance with our policy. If you do not consent, you must disable cookies or refrain from using the site. Ok
Home GUNKI G'BUMP, THE BLACK MAGIC LURE

Ever since the G’Bump entered the Gunki range, I became an instant fan of this lure. I can remember the first time I fished it; a plain white prototype lure that had not even been named. Fishing it vertical style, it took just a couple of minutes to catch the first little, aggressive zander on it. Today, a couple of years later, this lure has a permanent place in my tackle box and on many occasions it has been a real game changer.

On this particular session we were fishing on a big lake in Holland with my small inflatable boat. This really gives me an extra kick when fishing like this. Just thinking about the adventure involved in going out with a small boat on a such big venue always makes me grin with anticipation. A constant on such big bodies of water is the fact that you really have to search for the fish. It is not really a question of ‘hot spots’ as such, but more plenty of ‘hot zones’. As a hot zone can easily be a couple of hundred meters long, I tend to use lures that produce powerful vibrations like the G’Bump. The vibrations this shad makes seems to irresistibly draw predators to it. I mean, it is almost as if, Jérôme Riffaud the Gunki brand manager, had added a bit of black magic when he designed it! 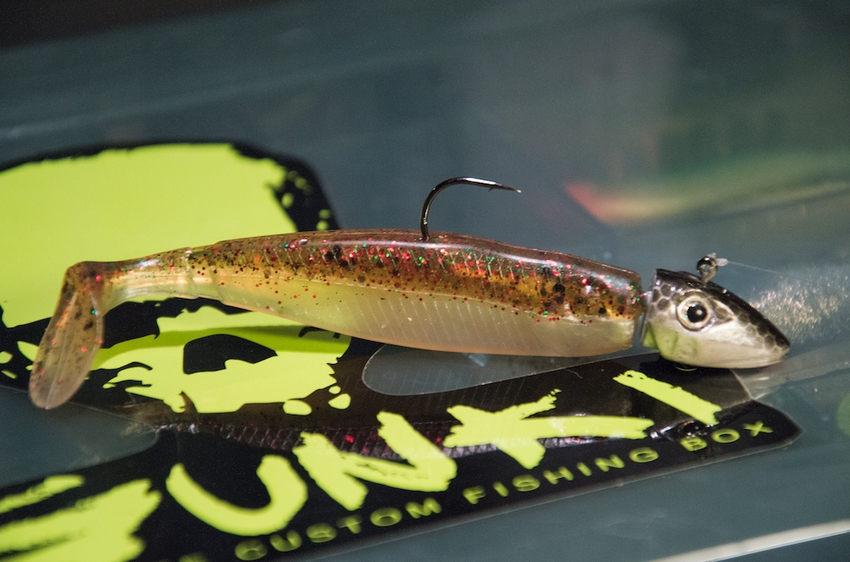 The Gunki G’Bump, one of my favourite lures.

As I started the session, my attention wasn’t on fishing, but rather absorbed by the natural splendour that surrounded me. The upcoming autumn had turned the hot zone we were fishing into a completely different place. For a moment I felt as if I floating around in a masterpiece of a famous painter ! Well, that was until I got several short, hard bites that jerked me back to reality just in time to see some hungry fish following my G’Bump. This is a typical sign for me that it’s time to change the lure. When this happens I will continue changing until I find the size, colour, vibration and jig head weight combination that will get the fish to bite. So, bearing that in mind, I chose to switch from a 10 gram to a 18 gram G’Round jighead on which I rigged a 8cm G’Bump in the new Brown Sugar Green Red Flake colour. With this combo I was able to fish faster and work it with some hard jerks which made the lure dart from left to right. It only took two casts for a cool little pike to grab my rig and try to destroy my lure! Smiling smugly as I washed off my pike impregnated hands, I knew that I had made the right choice by changing my setup. 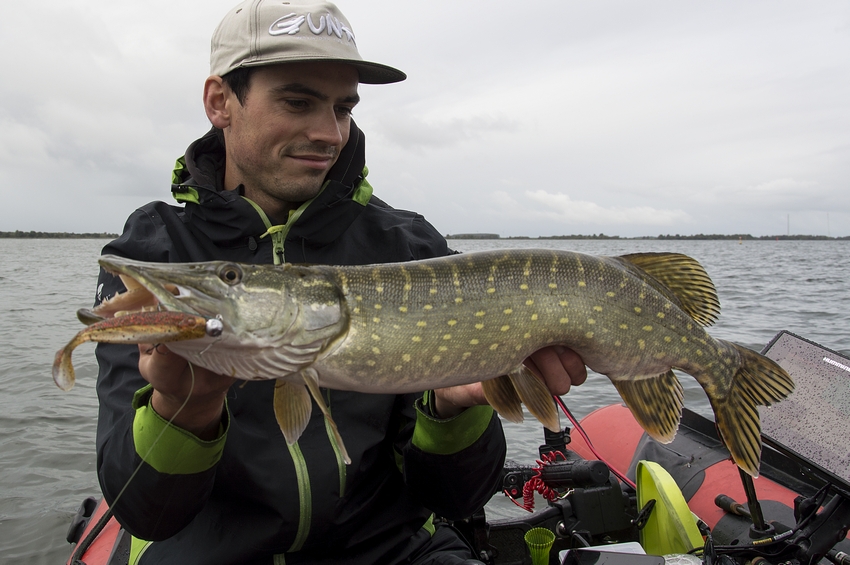 After releasing the amazing coloured pike back to where it belonged, I re-positioned my little red, inflatable boat. Luckily the pike had not warned the rest of the underwater world as it took only two short casts to get the next bite. After a short but very intense fight, my fishing buddy netted the fish. This time I didn’t see a long, green, yellow spotted crocodile thrashing in the net, but something that looked more like an oversized pizza. After quickly taking some photos, it was time for a magnificent 47cm perch to swim back home. Once again, switching to a somewhat heavier setup actually really paid off. 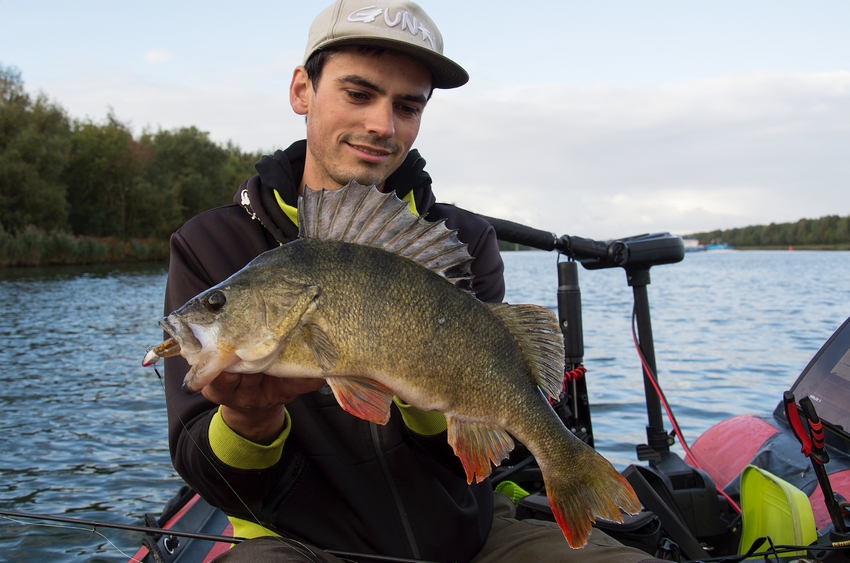 A couple of smaller fish later, it was time to change spots again. The 9,9 horsepower Suzuki engine took us relatively quickly from A to B. As this zone featured a totally different configuration, it was time for us to adapt our strategy. It was no longer a hot zone, but clearly a hot spot with visible structure above and under water. On this particular spot I chose to switch back to the lighter 10 gram setup, but still with a 8 cm G’Bump. Like that I would be able to be really precise as I fished around and in the structure. After catching a couple of smaller perch, I had a bite that almost ripped the rod out of my hands. During the first minutes of an epic, nerve racking scrap of a fight I was convinced that I had hooked a big zander, but finally, after a series of insane rushes, an awesome pike of 103 cm broke the surface. What more could you wish for?! 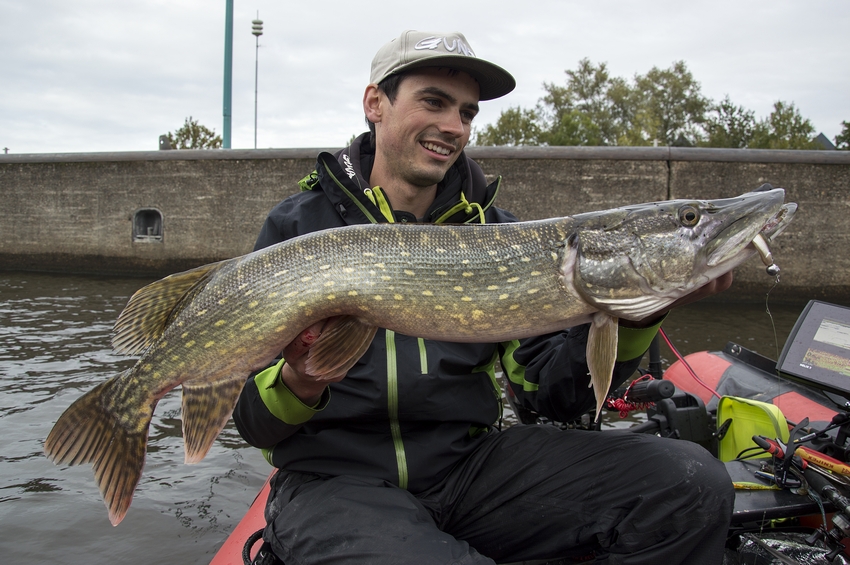 The perfect ways to finish the day thanks to my magical lure, the G’Bump.

Once again,  the Gunki G’Bump had worked its magic and caught me some really beautiful fish. So, next time you go fishing, be sure to never leave home without some G’Bumps and a wide range of jig heads in your boxes!

Here is a short video of this unforgettable day!