By using and browsing our websites, you consent to cookies being used in accordance with our policy. If you do not consent, you must disable cookies or refrain from using the site. Ok
Home TITAN BOXING PUNCH CATFISH ROD

Flashback to a summer session with some friends spent bending carbon or more precisely the TITAN BOXING PUNCH S-210 catfish rod. When fishing for catfish the gear you use has to be 100% reliant as the slightest weakness will undoubtedly turn to these river monsters’s advantage.

It was only just 8 o’clock and with two friends, Flo and his son, we set out on the water, eager to catch some big cats! The technique of the day was live bait rigged on a fireball. For this style of fishing, with its 2m10, tip action and 100-300 g test, the TITAN BOXING PUNCH is just perfect. We had hardly started our first drift and Tinou, Flo’s son, had the first arm jarring bite! After a short but fun fight, a nice cat of about 1m60 broke the surface. In order to minimize handling the fish and to gain time, we unhooked it in the water. The session had started well, but I was hoping that we would be able to catch something a bit bigger! Almost at the end of the drift, Flo hooked up with a much nicer fish. At last the TITAN BOXING PUNCH was going to be able to show what it could do. To begin with Flo was a bit too cautious and the cat gave him really a hard time! But, once reassured that the rod was not going to break, he put the pressure on the fish and immediately the fight turned in his favour. Rapidly a catfish of over 2m surrendered and needless to say that my two friends were overjoyed! 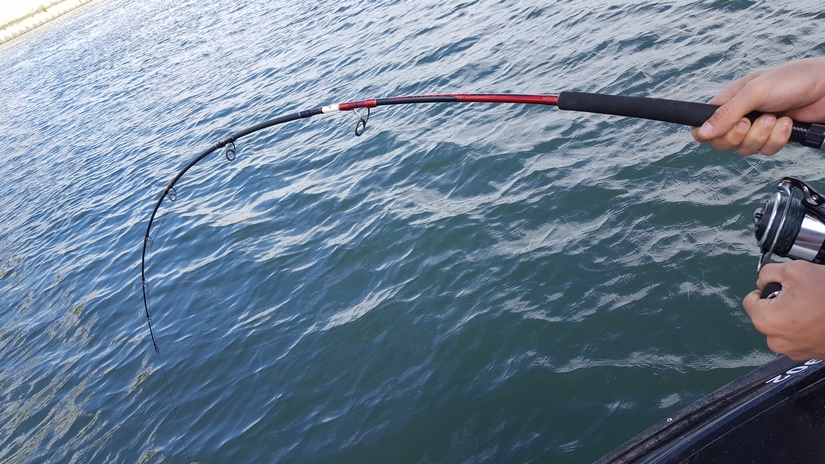 Bending the TITAN BOXING PUNCH on a nice cat.

We continued the same drift as the fish seemed to be active. A few minutes later it was my turn to have the rod almost ripped from my hands! The fish was even bigger than the last one and once again the TITAN BOXING PUNCH did the job. The rod's action is impressive but it still had sufficient power to counter anything the fish could try. It was quite surprising to be able to control the fight with such ease! After a shot but epic fight, a fish of over 2m20 surrendered and we headed to the shore. Two other friends, who where fishing nearby, joined us for the photo session. 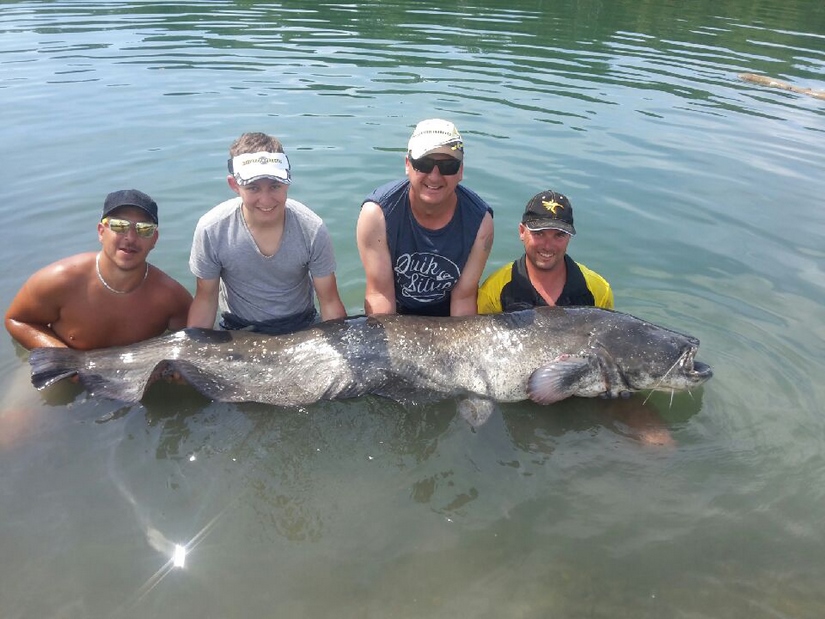 A 2m26 catfish that was no match for the TITAN BOXING PUNCH.

After such a good start, it was time to see what the TITAN BOXING PUNCH could really do. That is also part of testing gear, you really have to push it to its limits! All we had to do was to set the drag on full and hook a nice fish. Of course thing never go as planned and only "small" cats seemed to want to play... We had to wait for two long hours before a nice sized one grabbed the rig. I set the hook, made sure that the drag was on full, and passed the rod to Flo. Even though he was not used to this style of fishing, this time he really showed who was in charge, perhaps even more than I would have dared to do! The curve on the rod was just as impressive as the amount of power it still packed. The 12th fish of the morning, another 2m+ cat, gave up to the insane power of the TITAN BOXING PUNCH, Tired but happy, Flo and his son decided to call it a day! 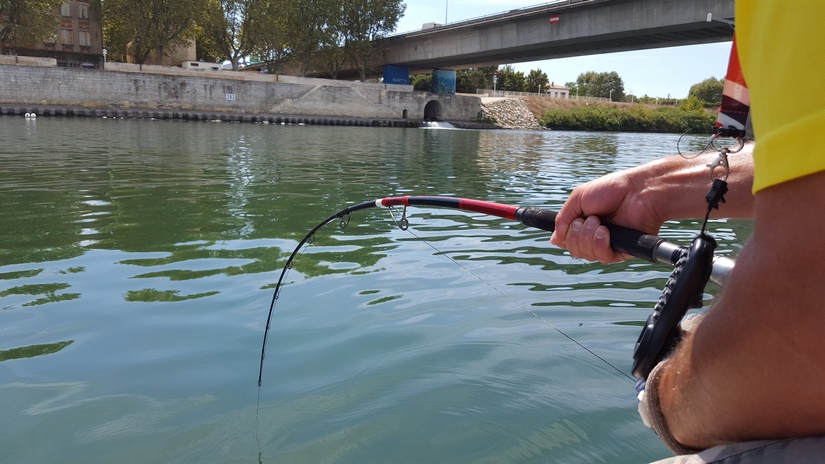 Putting on the pressure with the TITAN BOXING PUNCH.

I do not unusually put as much pressure on a fish, but when you test gear, there is not a 100 ways to do it! Without doubt the TITAN BOXING PUNCH is the perfect specimen catfish rod for heavy fireball applications. 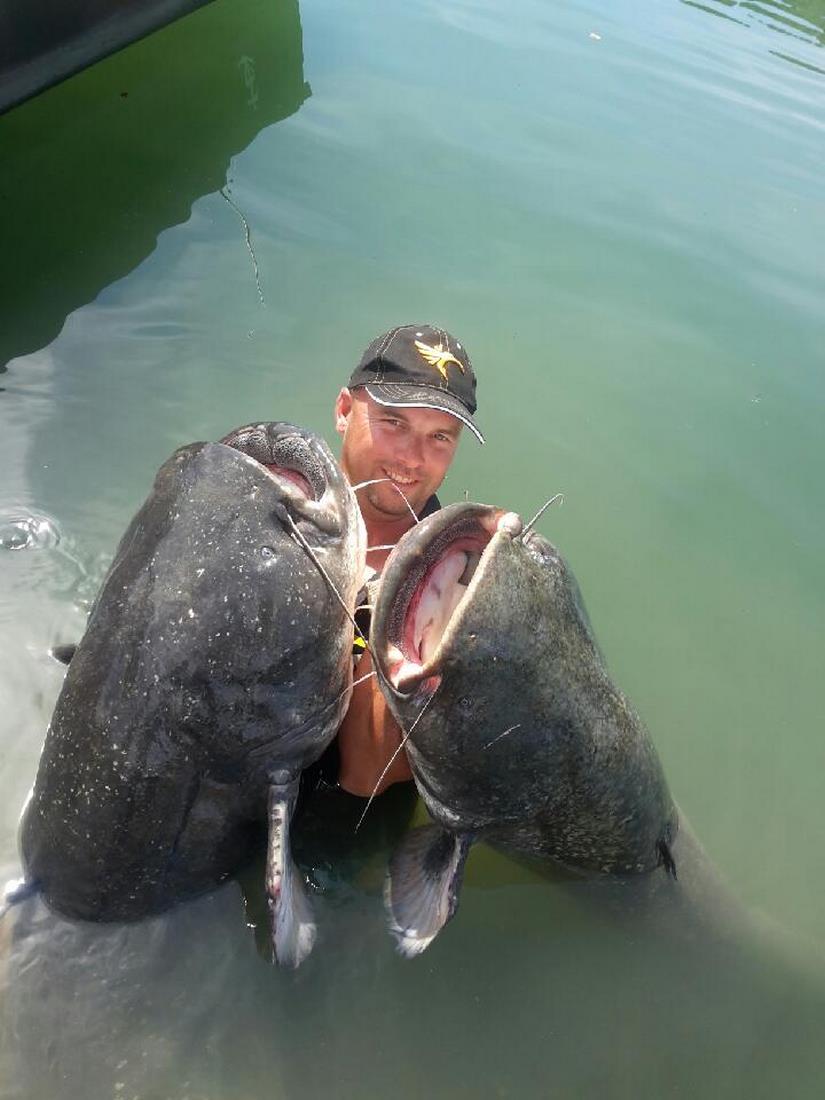 See you soon for some more fishing adventures!