By using and browsing our websites, you consent to cookies being used in accordance with our policy. If you do not consent, you must disable cookies or refrain from using the site. Ok
Home VICTORY AT CERGY: GUNKI NATIONAL CHAMPION

The Leisure Island complex of Cergy was host to the last date of the 2016 French FFPS 2016 national championship and everything was possible be it  for the Pro Elite or Challenger anglers. The first would be fighting for the podium and the second to access the much sort after Pro Elite division. Leader of the Pro Elite division I only had 2 points advance on Tom Bontempelli, meaning that if I didn't finish in the top 3 places, he could win the title. It promised to be a hard fight as Tom is a perch ace and the Cergy venue is a real perch hot spot. Just behind us, 2 other anglers could easily win the title if we blanked, so needless to say that I had one thing on my mind: catching as many stripy devils as possible!

My gear for this competition would be composed of my 2 choice perch combos, the STREETFISHING S-210 ML rod, 0.065 FINESS BRAID, 0.17 ICE FLUOROCARBON and the IRON-T S-210 ML for drop shotting with 3.5 to 14g Gunki DROP SHOT TEAR leads. These leads are great as they have mat grey which I much prefer to the shiny version for 2 reasons: they don't spook the fish when you insist a while on the same spot and they don't distract them from your lure. Lure wise, for drop shotting I chose to use the GUNKI TIPSY and KIDDY, the 7.5cm WHIZ and V2IB if a heavier rig was needed but otherwise I planned to rig them on jig heads. Just in case I'll also had the STREETFISHING S-210 MH rod if ever the pike wanted to play! 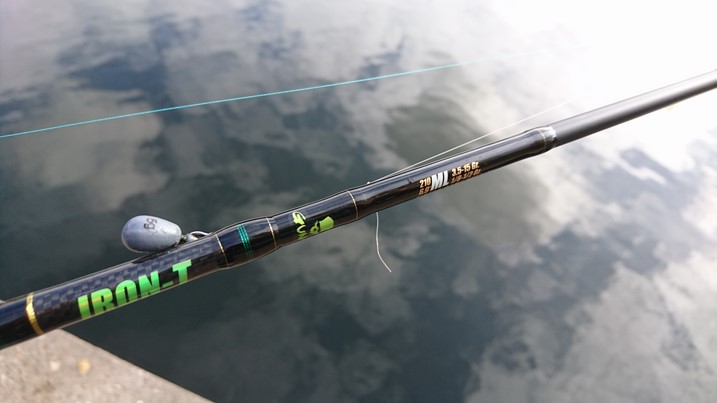 After the compulsory briefing on where we could fish, the rules... it was at last time to take place on the bank. As the anglers began to place themselves, the different strategies appeared and with them the species targeted. I headed for spot on the lake where the weed beds were not too dense so that I would be able to fish the drop-off and the deeper zones. The local church bells rang 8:00 and the lures began to fly! It was still ringing when I slid the first perch of the day into my net. Things were looking good, even if I  was a bit surprised that the spiky critters were active so early, it also reassured me that I had made the right tactical choice. 20 minutes later, I netted my second perch, if the rhythm held up so would my chances at standing on the top of the podium! 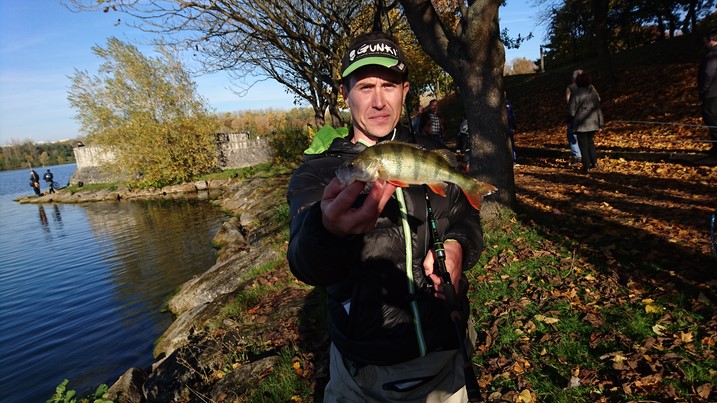 A bit all over the lake you could hear anglers shouting but it was impossible to tell if they shouting out in celebration or dismay! After a while, and with a bit of investigating, it appeared that quite a few anglers had caught perch and, luckily for me, all the pike had been missed. As the wind started to blow, the bites became less and less frequent and I seemed to only be able to catch undersized perch. In order to get the big fish coming I let the smaller ones try and take lures too big for them and the underwater commotion got the larger ones coming. It worked, I have 2 cut offs from pike and 2 nice sized perch. I almost lost the biggest one though, during the fight the drop shot lead got stuck in some rocks, I just could not risk losing the  fish so I extended the STREET HANDLE NET 240 to almost maximum reach and netted the perch 2 metres under the surface! Once in the net I pulled hard to break the lead off and lifted the net as fast as possible out of the water... and it worked! 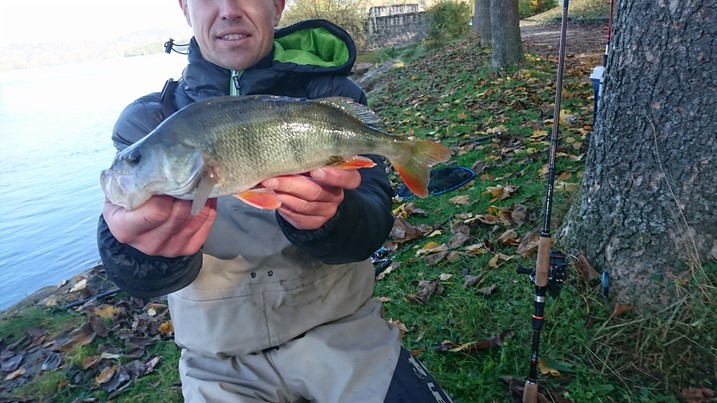 Being close to Tom Bontempelli, I knew that he had also caught 4 perch. Making the most of every second of fishing, we both had to sprint to be at check-in before the bell rang! At the half time mark there were a few anglers who had 4 fish but I in the lead by a couple of centimetres. Only 1 pike had been caught during the morning, all the rest of the fish were perch.

The excellent meal offered by the Team Carna 95 Club enabled all to recharge our batteries, I made the most of this break to reorganise my gear and change all my terminal leaders, I just couldn't afford to lose a fish. At the bell, everyone sprinted back to their spots and concentrated on the fishing, at this point anyone could still win the competition. I had to wait half an hour before I saw my first perch in my net. The key that afternoon was to fish slowly, to change lure regularly and to stay hyper concentrated, by proceeding like this, my co-angler and myself caught 2 perch each. I had a full card and was really happy to finish the season on such a result. The other anglers had also caught fish but none hadmore than 5 due to cut-offs or lost fish. It wasn't easy but I managed to finish first, in front of Thierry N’Guyen and my friend form Illex, Thomas Gasnier. Well done guys! This third victory on the circuit crowns me Champion of France! 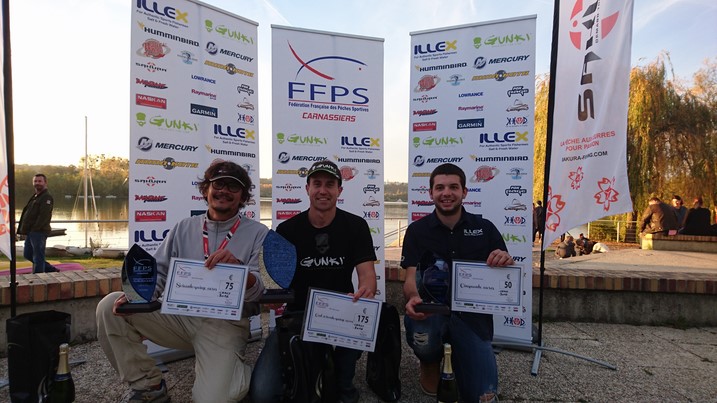 Well done for the impressive results of the Challengers and welcome to the Pro Elite divison for best of them.

For the 4th year on the run, the Team Carna 95 Club won the Club Champion Title!

A massive thanks to all the volunteers from the Team Carna 95 Club for this really well organized edition and to all the clubs that have organized events during the 2016 Championship.

Thanks to Jérôme Riffaud and Frédéric Jullian for their support, trust and the great gear that they have developed!