By using and browsing our websites, you consent to cookies being used in accordance with our policy. If you do not consent, you must disable cookies or refrain from using the site. Ok
Home GUNKI ITOKA: TRUMP LURE

Not so long ago, my friend Marco Beck and I were on a fishing trip in the middle of Sweden to fish for pike. The conditions where hard as a cold front had made the water temperatures drop to only 5°C, needless to say, the fish really weren’t in a biting mood. We decided to fish a shallow bay, 1 to 1.5 meters deep, banking on the fact that with the sun the water should warm quicker and that hopefully the fish would be more inclined to feed. In the crystal clear water we could see isolated pike that would just freeze or vanish as soon as they saw us… We started by casting jerkbaits as far as possible to try and keep out of their sight. The lures where running at about 50cm under the surface, and by really jerking and twitching them we got a lot of fish to follow, a few short hits and  3 or 4 small pike that averaged 50cm. The key to trigger them was to make long pauses as soon as a fish started following, and sometimes, on the first jerk after the stop, they would just nip the lure sufficiently to get hooked.

I decided to try another lure, the Salty Ayu Itoka 125S…why hadn’t I done so earlier?!!! First cast, and literally seconds after the lure had started swimming, a pike tried to destroy it. Judging by the force with which it had taken the lure I was rather surprised when it measured “only” 70cm! At last the first reasonable fish of the session was in the boat. After a quick photo it went back to where it belonged: in the water.

Luck? No way, second cast, same punishment! The second fish of a long series jumped out of the water shaking its’ head to try and get rid of my lure.

The trick was the way the lure swam; the pike, even though they reacted to hard jerked lures, just went crazy on the sexy S motion of the Itoka. We also tried the 155F version and it worked great too, in fact we would alternate the 2. When a pike followed but didn’t take one version, we’d swap lure, and 9 times out 10 the pike would take the other lure. 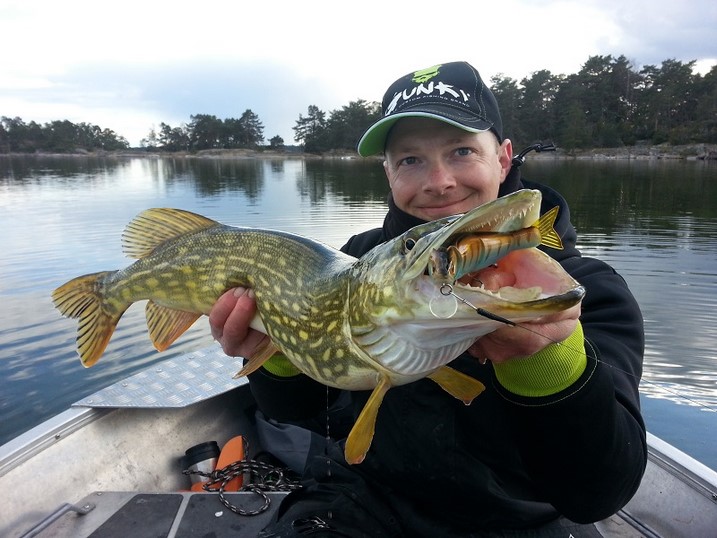 So next time you’re out on the water and the fishing is hard, try the Gunki Itoka and it might just save the day!